There was no formal library as such when the Bloomsburg Literary Institute was revived in 1866 under the direction of Henry Carver. The 1868 catalog did state that the school's literary society had a good reference library, which was located in Institute Hall, now Carver Hall. When a dormitory was completed in 1869 a room was provided there for the library. When that building burned down in 1875 a new dormitory that would be named Waller Hall in 1927 was completed the following year. There were now two literary societies and space was allotted on the first floor of the dormitory for both their libraries. This situation worked out satisfactorily since almost all students were members of one society or the other and had access to the books. 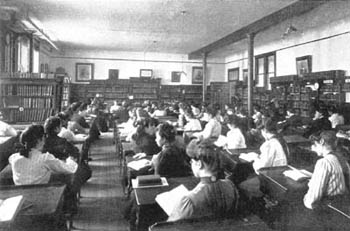 By 1888 a reading room was opened to provide students with daily and weekly newspapers in addition to well-known periodicals. But the school was growing at this time and required more than this, and so in the fall of 1890 a large room on the first floor of the dormitory was turned into the school's first formal library. The room held the school library and books from the two literary societies, including standard works of fiction, history, and reference books. A student with the title Custodian of the Library oversaw operation of the new facility. By 1892 a faculty member, Prof. Francis H. Jenkins, was named Librarian to provide more formal supervision in addition to his teaching duties in grammar and composition. Jenkins created the first card catalog that was ready for use in January 1896. He did not have formal training, however, and so in 1895 a professionally trained librarian was hired as an assistant.

An addition to the dormitory completed in 1894 enabled the library to move to a larger room near the entrance to the gymnasium.  It also served as a study hall, with rows of desks in addition to shelves, tables, and easy chairs.  The library remained there until the summer of 1907 when the completion of Science Hall freed up classroom space on the dormitory's second floor.  Recitation rooms and a hallway were combined to provide a larger space for the combination library/study hall, along with the growing collection.  Several hundred dollars worth of books were acquired each year. 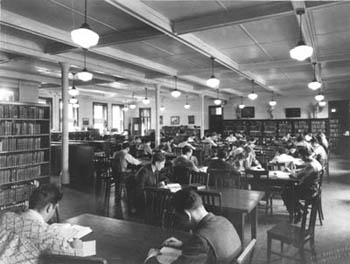 The library remained a study hall until 1920 when extensive remodeling and new furnishings made it more of a research facility.  At this time it included 11,000 volumes and bound magazines, which by 1940 had only increased to 15,000.  By 1950 though this had doubled to 30,000 and more room was needed. In the spring of 1958 the opening of the College Commons allowed the old dining room on the first floor of Waller Hall to be converted into library space that seated well over 100.

In 1960 the Bloomsburg State Teachers College became Bloomsburg State College and began a graduate program as well as instituting additional undergraduate majors.  The library grew as the school did, and by 1966 had reached 75,000 volumes.  It had been recognized that the library deserved its own building to appropriately serve the college's students, and so in November of 1964 construction began on a facility that would hold 200,000 volumes and seat 750 students at a cost of over $1,000,000.  The new building opened in September of 1966, and in October 1967 was named the Harvey A. Andruss Library in honor of the college's longtime president. 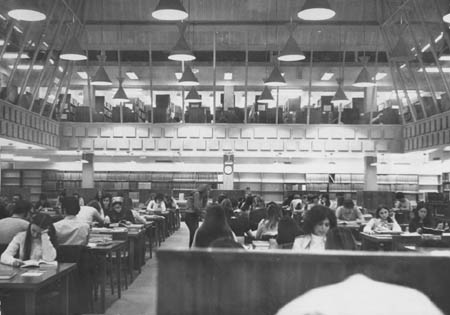 New undergraduate programs, enrollment that grew to over 7000 students, and the change to university status in 1983 increased the library demands of students, faculty, staff, and administrators to the point where the size of the collection reached over 2.5 million items. Like other academic libraries in the late 1980s and 1990s, Andruss Library responded to the advances in information technology by providing an automated public catalog, CD-ROM and Internet accessed databases, and systems for circulation, cataloging, and serials.

With the first library building being inadequate, in May of 1998 the Library's personnel and collections moved from the old Harvey A. Andruss Library into a new Andruss Library. The building has four levels and 105,000 square feet of space.  It provides study seating for more than 1,000 students and faculty and eighteen group study rooms for 6-12 students each.  It has stack space for 400,000 volumes.  220 IBM-compatible and Macintosh computers are available for use throughout the building and most have a full suite of programs accessible through them, in addition to specialized software and a wireless network throughout the building.  The new facility has been very well received on campus by all constituencies since opening.  The computer classroom located near the Reference Services area has also made the Library's instructional program much more effective than before. 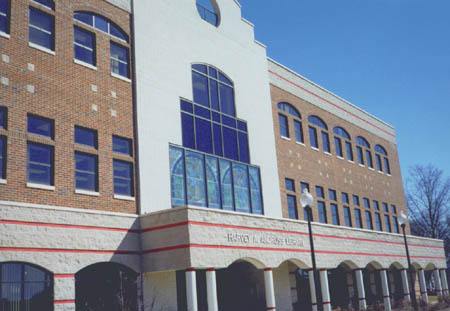 In spite of the comfortable surroundings offered by the new facility, emphasis has been and continues to be placed on making access to as many of the Library's resources as possible available to our clientele elsewhere on campus and off campus. All of the web-accessible databases can be utilized from anywhere with an Internet connection. Online forms have also been created to allow users to initiate requests (e.g. interlibrary loan requests, requests for books in process, book purchase requests, reference requests) from anywhere.

From its simple origin as a literary society library Bloomsburg University's Harvey A. Andruss Library has grown to become a major research and information center far beyond the imaginings of Henry Carver more than 150 years ago.