The Story of the Bloomsburg University Archives 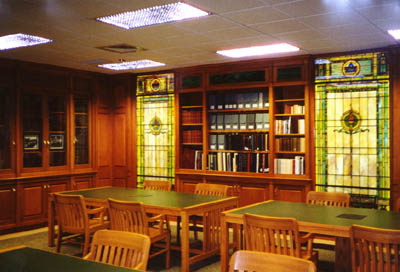 In May of 1998, the new Harvey A. Andruss Library at Bloomsburg University officially opened. What made this event even more important was the fact that for the first time in 24 years the University Archives, the official repository for all types of records and materials relating to the history of the school, was once again a physical and integral part of the library building.

The earliest recorded mention of the need for an archives at Bloomsburg was in 1967 when then President Harvey A. Andruss desired the creation of a file of materials on the history of Bloomsburg State College. Five years later in September 1972, James B. Watts, the former Director of the Library, was named Archivist and Special Services Librarian. At this time the historical file put together by the library was known as the Bloomsburg State College (BSC) Collection and located in the reserve area. It included course catalogs, yearbooks and scrapbooks of newspaper clippings, but no official records.

Mr. Watts retired in February of 1978 and for the next year the Archives was inactive. Early in 1979 it was moved to the basement of the Bakeless Center for the Humanities and reopened in March by the new archivist, Roger Fromm. He had been hired in 1974 as a reference librarian, and like his predecessor had no formal archival training but did have a love of history and desire to preserve the school's legacy. He remained archivist until his retirement in 1995. The new room in Bakeless was the best that could be hoped for at the time, but it was small and had large water pipes running through the ceiling, exactly the type of environment that should be avoided in order to ensure the safe storage of permanently valuable materials. It was hoped that the Archives would be able to have a more suitable home in the new Human Services Center that was to be built in the 1980s, but that did not happen. It remained in Bakeless for just over nineteen years until the new library was completed in 1998.

Planning for the New Library Building In the fall of 1996 Robert Dunkelberger came to Bloomsburg as the new University Archivist and Coordinator of Special Collections, after having worked as an archivist at the University of Illinois. During the planning process for the library building it was decided that the University Archives' new facility would consist of four separate areas that would also house the library's Special Collections, allowing for the union of these two valuable research collections. The four areas would be a reading room for patron research, faculty office for the Archivist, workroom for organizing materials, and a large storage area containing compact shelving and a vault.

The total size of this space was to be 2735 square feet, compared to the former Archives in the basement of the Bakeless Center that had only 1000 square feet. The new Archives/Special Collections area provided not only greatly increased storage capacity but for the first time there would be separate areas for research, faculty workspace, and student workers.

Once the new building was completed a great deal of work went into the process of actually moving all of the Archives and Special Collections materials into the new space. Detailed floor plans and layouts were created to show the exact location for furniture, equipment, and the collections. The amount of material moved consisted of over 550 cubic feet of records and supplies from the Archives, 450 linear feet of books from the Special Collections room, and nearly 400 linear feet from the vault in the library. The move took place over several weeks, was a great deal of work, but in the end definitely worth it. There is little doubt that the Archives Reading Room is one of the most visually stunning areas on the University campus. Five of the seven stained glass windows that were in the old library adorn its walls. The arched Tiffany window is over the doorway, and the four rectangular windows made by the George W. Spence Company of Boston are paired on two of the walls. In 2000 preservation work was completed on the windows, which were cleaned and covered with protective glass. The Spence windows were also completely backlit with two six-foot long fluorescent tubes behind each one that brought out the full colors of the glass.

The reading room also contains copies of many of the University's publications from over the years, including yearbooks, course catalogs, student handbooks and newspapers, the alumni magazine, athletic media guides, and scrapbooks. Special Collections is represented by most of the books from its extensive collection on local and regional history. Three large tables with a total of twelve chairs are available for researchers, which are also occasionally used for organizing and sorting materials.

A big part of collecting historical items is also exhibiting them, and in front of the University Archives/Special Collections area on the third floor of the library are three exhibit cases for displaying and publicizing the collections. Some of the exhibits put on display have documented the Maroon & Gold student newspaper from 1960-74, the Ben Franklin Training School,  covered bridges, the Bloomsburg University Players theatre group, World War II naval training programs, Carver Hall, and former President Harvey A. Andruss.

It has been over four years since the Bloomsburg University Archives moved into the new space, and it has been very rewarding. It is a vast improvement over the previous facility, and should serve the Archives and Special Collections unit of the Harvey A. Andruss Library well for years to come.

The four Spence stained glass windows were acquired in 1918 and 1919, thanks to the efforts of Prof. O. H. (Oscar Hugh) Bakeless (1858-1933), who was secretary of the Memorial Committee.  Professor Bakeless was an 1879 graduate of the Bloomsburg State Normal School, and served as head of the Department of Pedagogy from 1902 to 1929.  He was responsible for soliciting the necessary funds for the windows from students, faculty, and alumni. 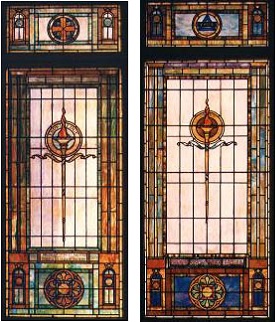 The rectangular windows were made by the George W. Spence Company of Boston at a cost of nearly $400.  The first two, Wisdom from the Calliepian Literary Society and Knowledge from the Philologian Literary Society, were purchased and made in 1918.  The second two, Temperance from the YMCA and Virtue from the YWCA, were ordered and received in 1919.  Prof. Bakeless felt that the windows would provide the right atmosphere to put students in a more reflective and studious mood.

The Spence Windows can be seen in the University Archives/Special Collections Reading Room on the 3rd floor of the Harvey A. Andruss Library.

The Harvey A. Andruss Library is very fortunate to have three beautiful Tiffany stained glass windows gracing the building.  They were ordered in 1919 and acquired by the Bloomsburg State Normal School (BSNS) in 1920, thanks to the efforts of Prof. O. H. (Oscar Hugh) Bakeless (1858-1933), who was secretary of the Memorial Committee.  Professor Bakeless was an 1879 BSNS graduate and served as head of the Department of Pedagogy from 1902 to 1929. He was responsible for soliciting the necessary funds for the windows from students, faculty, and alumni.

The three windows were made by the Tiffany Studios of New York City and were purchased at a cost of just over $3000, with funds coming from the Semi-Centennial Memorial Fund. The large windows represented Truth and Virtue, with the third window an arch connecting them. The windows were installed in the annex to the dormitory building, later named Waller Hall, and were presented to the school by its alumni on June 5, 1920 to commemorate the 50th anniversary of the first class of teachers and to honor the longtime service of Principal David J. Waller, who was retiring. The windows remained in the Waller Hall annex until March of 1966, when they were removed in order to place them in the west side of the Harvey A. Andruss Library which was then under construction.  The windows stayed in that building until they were moved one more time to the new library facility, which opened in May, 1998. The Truth and Virtue windows can be seen in the front of the Harvey A. Andruss Library on the 2nd floor. The connecting arch is over the doorway to the University Archives/Special Collections Reading Room on the 3rd floor of the building.